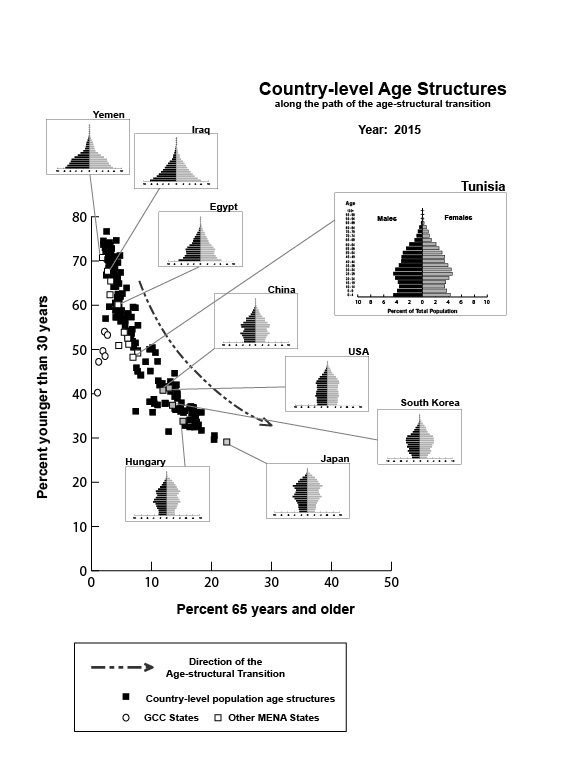 Figure 1.  The course of the age-structural transition is pictured by positioning the world’s states (in 2015) in terms of their proportion of young people (less than 30 years of age) and seniors (65 and older).

Initiated by fertility decline, the age-structural transition entails gradual shifts in the relative size of age cohorts through a lengthy, relatively predictable series of configurations. The Age-structural Theory of State Behavior owes much of its predictive potential to: (a.) the power of these configurations to influence, amplify, control, and reflect, a broad range of interacting demographic, social and economic conditions; and (b.) the ability of demographers to predict future configurations using cohort component methodologies.

To describe the age-structural transition (Fig. 1) with some narrative clarity, I employ the classification system published in the (U.S.) National Intelligence Council’s Global Trends series of publications (National Intelligence Council [NIC], 2012, 2017). Although the age-structural transition is continuous, this system intuitively divides the transition into four discrete phases, based on country-level median age (the age of the “middle person”, for whom 50 percent of the population is younger): the youthful; intermediate; mature; and post-mature phases.

Why does Age-structural Theory provide a useful estimate of the current and future behaviors of states?  Clearly, there is more to political action and risk than a country’s demography (isn’t there?).  Indeed, there is. However, the chain of causality that ends in intra-state conflict, democracy, or economic development is varied and complex. Using population age structure, analysts can take a step back and take a statistical view of state behavior, moving away from the close-up determinism that typically pervades country analyses.  An analysis using age structure reflects the state of a system of mutually re-enforcing effects that move between fertility decline (which drives age-structural change), educational attainment and income (Fig. 2). And, because the UN Population Division projects the configurations of every country’s age structure into the foreseeable future (and, some would argue, beyond it), age-structural models, which have been developed with past data, can be applied to the future.

Figure 2.  A graphic representation of the feedbacks that ultimately drive age-structural change.