After four months of political unrest and more than 250 deaths, the calls for Nicaragua’s embattled president Daniel Ortega to step down are escalating. One of political demography’s most robust statistical findings tells us that countries where an authoritarian government rules a youthful population, any change in regime typically yields an autocracy or at best, a partial democracy. Only very rarely has a liberal democracy emerged immediately after a rebellion in a youthful country (one with a population with a median age under 26 years). Given this, if Ortega is ousted from office, what type of leader should foreign

affairs analysts expect to replace him? 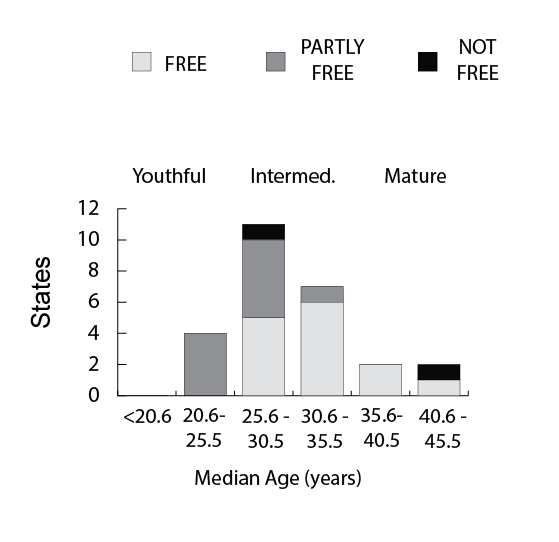 There are good reasons to be optimistic. Nicaragua—now with a median age between 26 and 27 years—is no longer a youthful country. Fertility declined from around 6 children per woman in 1980 to about 2.2 today, gradually shifting Nicaragua into the intermediate phase of its age-structural transition, which (according to the National Intelligence Council’s Global Trends report) stretches from a median age of 26 to 35 years.   More ….

Read the rest of the NSB essay on Nicaragua/Latin America here.

Over the coming months, political demographers will be closely watching the evolution of events in Venezuela. Why? Theorists in this field expect states to rise to stable levels of liberal democracy when they meet two criteria. One is demographic, the other political. For the first time, Venezuela meets both. Nonetheless, the lead choice for a new liberal democracy in South America is Colombia, which (according to Freedom House’s most recent assessment) is on the verge of entering its “Free” category — at 3.0 and trending upward. Next year’s assessment will hinge on the success or failure of the government’s FARC demobilization process.

For those following the “2008 prediction” made in the Wilson Center publication “Half a Chance“, Colombia’s climb to liberal democracy would mean the fulfillment of both predictions (at least one FREE in North Africa, at least one in the northwest corner of South America by 2020).