View the article, Will Tunisia’s Democracy Survive? A View from Political Demography, originally published on The New Security Beat.

What chance does Tunisia’s democracy have of withstanding the formidable challenges that periodically arise? Surprisingly, a good chance, according to recent research in political demography, a field that is focused on a limited yet robust set of relationships between demography and political outcomes.

Read the rest of “Will Tunisia’s Democracy Survive?” A View from Political Demography” here …

Read “High Food Prices an Unlikely Cause for the Start of the Arab Spring” by Richard Cincotta, posted on the New Security Beat, April 2014.

Just months after popular uprisings toppled Tunisia and Egypt’s authoritarian regimes, a trio of complex-system researchers published a brief article linking these demonstrations with high levels of the UN Food and Agriculture Organization’s international Food Price Index. Marco Lagi, Karla Bertrand, and Yaneer Bar-Yam’s model, which predicts outbreaks of deadly social conflict when the index tops 210, has since become a popular explanation wielded by many for bouts of popular unrest, including the Arab Spring and overthrow of Ukraine’s government. But were food prices really an underlying “hidden” cause for the start of a wave of instability that is still being felt today?

Not everyone is convinced, least of all, international food policy analysts.

Read the rest of the essay here …. 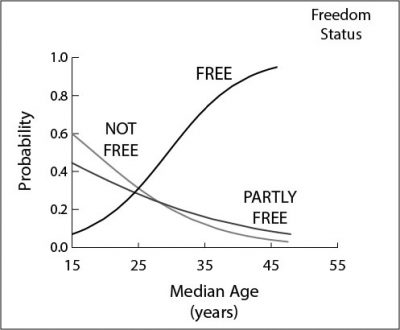