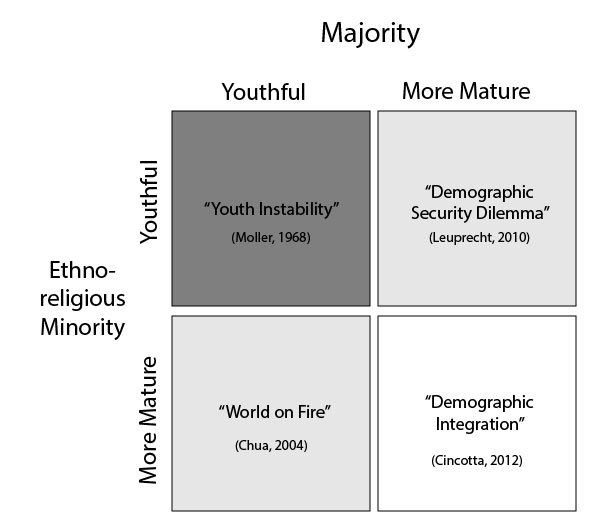 According to political demographers, who study the relationship between population dynamics and politics, two characteristics when observed together provide a rather good indication that a state is about to shed its authoritarian regime, rise to a high level of democracy, and stay there. Myanmar has both.

So why, despite an impressive succession of social reforms and political reversals, including the recent victory of the National League for Democracy led by Aung San Suu Kyi and the first elected civilian president, U Htin Kyaw, should analysts remain somewhat skeptical of Myanmar’s ability to make the leap to liberal democracy? The answer can be found in Myanmar’s dismal record of managing inter-ethnic politics, particularly the systematically disenfranchised Muslim Rohingya minority.
Read more ….

View “Government without the Ultra-Orthodox?: Demography and the Future of Israeli Politics” by Richard Cincotta, published in the Foreign Policy Research Institute’s E-Notes, December 2013.

It would be hard to conjure up a more grave and immediate set of peacetime challenges than those that Israel faces—from the advances in Iran’s nuclear program, to the political instabilities that continue to play out along the length of its borders. Yet, the outcome of the January 2013 election of the 19th Knesset appears to have been shaped less by the Israeli public’s perceptions of foreign threats, and more by its domestic concerns.

This brief note raises two questions: How did Yesh Atid rise from a virtual standing start to claim a critical position in Israel’s 33rd government? And what does this party’s electoral achievement mean for the future of Israel’s democracy?

Read “Minority Youth Bulges and the Future of Intrastate Conflict,” by Richard Cincotta, posted in the New Security Beat on October 13, 2011. The sub-state demographic theory of the risk of ethnoreligious conflict described in this essay has been applied to several countries. See “The Refugee Crisis in the Levant” (Barnhart et al., 2015, American U.), and The Demography of the Rohingya Conflict (Blomquist & Cincotta, 2015), and the Ethno-demographic Dyanmics of the Rohingya Conflict.

From a demographic perspective, the global distribution of intrastate conflicts is not what it used to be. During the latter half of the 20th century, the states with the most youthful populations (median age of 25.0 years or less) were consistently the most at risk of being engaged in civil or ethnoreligious conflict (circumstances where either ethnic or religious factors, or both, come into play). However, this tight relationship has loosened over the past decade, with the propensity of conflict rising significantly for countries with intermediate age structures (median age 25.1 to 35.0 years) and actually dipping for those with youthful age structures (see Figure 1 below).

Why has this relationship changed? At least two underlying trends help explain the shift:

Read the rest at …

Read the NIC occasional paper entitled, “Unpromising Demography in a Promised Land: The Growth of Dissonant Minorities and the Escalation of Demographic Politics in Israel,” written by Richard Cincotta and Eric Kaufmann (U. London) and published in 2010.

Israel’s demographic challenge is more complex and immediate than most Middle East analysts assume. Secular and religiously traditional Israeli Jews, both native-born and immigrant, upon whose Zionist hopes and political ideals Israel was founded and maintained, are experiencing a “demographic squeeze”–the rise of two dissonant ethnoreligious minorities: the Haredim (Ultra-Orthodox Jews), who typically harbor sympathies to the right; and Israeli Arabs, whose political sympathies lie largely to the left. With each passing year, Israeli Arabs and Haredim, both of whom express grievances with the Zionist political and sectarian order, assume a larger proportion of the country’s population.