In 2007, at the (U.S.) National Intelligence Council, a colleague and I set out to determine if we could forecast two distinct political phenomena, the rise and the demise of high levels of democracy. To guide our decade-long forecasts, we relied on a simple statistical model and a spreadsheet of demographic projections from the UN’s 2006 World Population Prospects data set. Now that the experimental period (from 2010 to 2020) has ended, we can look back and ask: How well did these forecasts perform?

Overall, surprisingly well; but by no means, flawlessly. In fact, we expected too much political liberalization during a decade when democracy was largely in retreat. Yet, had our age-structural forecasts been taken more seriously when first presented and published (see “Half a Chance”, published by the Wilson Center’s Environmental Change and Security Program), foreign affairs analysts might have been amply forewarned of two of the decade’s most unanticipated political events: Tunisia’s rise to liberal democracy (Free in Freedom House’s annual assessments); and the demise of four of West Africa’s liberal democracies (decline from Free to Partly Free or Not Free).

To continue reading, go to: New Security Beat, Predicting the Rise and Demise of Liberal Democracy: How well did we do?

Statistical predictions can be made from can be made from simple curves (see Figure below for Tunisia). This brief essay shows how drawing a line through a set of age structural functions (functions that describe the shift in a categorical probabilities over the age-structural transition) yields a set of probabilities for each category. To see how it’s done for child survival, per-capita income, and liberal democracy, and to see the predicted outcomes for Tunisia, Colombia, Bangladesh (this one is surprising!), Uzbekistan, Philippines, and Nigeria, click here or go to the “Individual State Forecasts” page in the Forecasts menu. 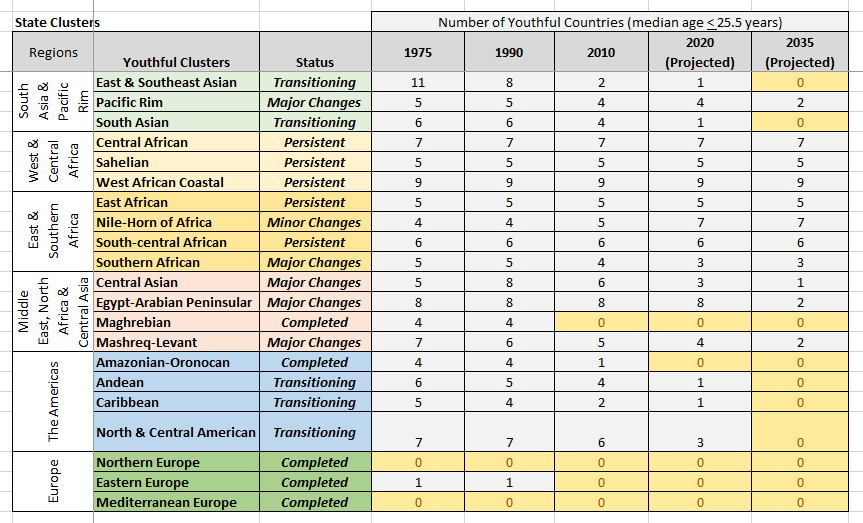 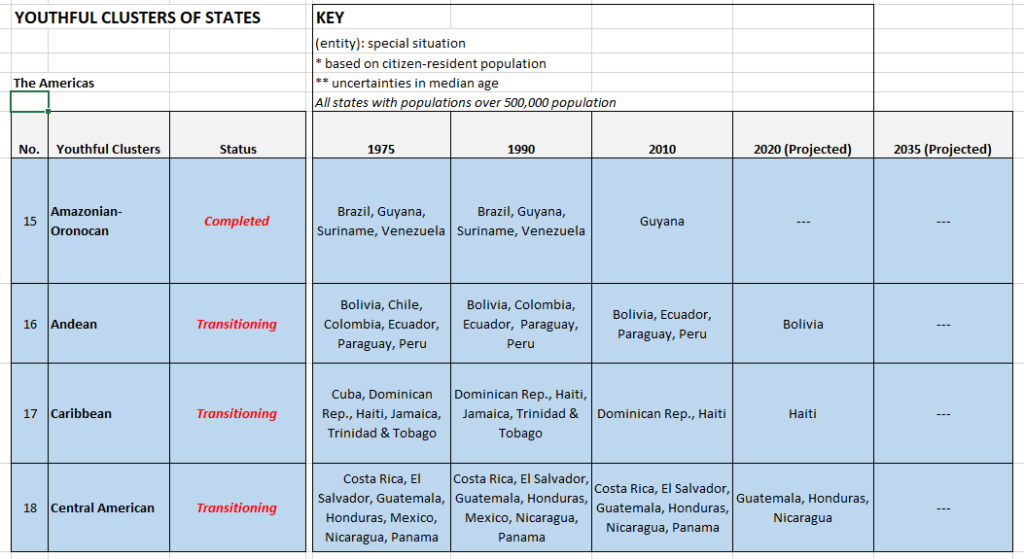 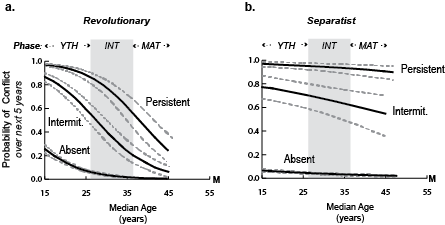 Tracking Forecasts and Their Outcomes.  It’s one thing to make timed forecasts (difficult), it’s another to track them (boring), note the successes and failures (a bit more interesting), and modify the theory to learn from the outcomes (painful). The theory behind these forecasts are summed up in the New Security Beat essay, “The 8 Rules of Political Demography“.  Age-structural theory is covered in a longer article in the Oxford Research Encyclopedia of Politics.

The following spreadsheet (image posted below, downloadable here as an Excel Spreadsheet) is an effort to account for both the successes and failures of age-structural forecasts.  Several forecasts have been discussed in lectures, but have not yet been published in either journals or in web essays.  The next web essays will put these in print.