This GT2030 blog, focused on population aging, begins with this introductory essay aimed at familiarizing readers with some of the demographic and geographic particulars of this phenomenon, and with several key demographic terms. The term most in need of definition is, of course, population aging. Strictly speaking, aging is any shift in the population’s age structure (the distribution of individuals, by age) that produces an increase in the median age (the age of the individual for whom one-half of the population is younger). Generally, advances in a population’s median age are associated with increases in the proportion of seniors (aged 65 years and older), and declines in the proportion of children (younger than 15). Sustained population aging leads to a relatively older workforce, slowed workforce growth and slowed growth among school-age children.

While various age-specific patterns of birth, death and migration can induce change in the median age, over the past century two demographic processes have contributed most powerfully to country-level population aging. First and foremost is declining fertility (fertility is usually measured by computing the total fertility rate (TFR), an immediate estimate of the numbe

r of children that women are bearing over their reproductive lifetime). The second most influential factor has been increasing longevity. Not all trends associated with modernization, however, contribute to aging. Declines in childhood mortality have served to slow aging’s pace or make it retreat, as have waves of youthful immigrants (until the immigrants themselves age) and occasional baby booms. 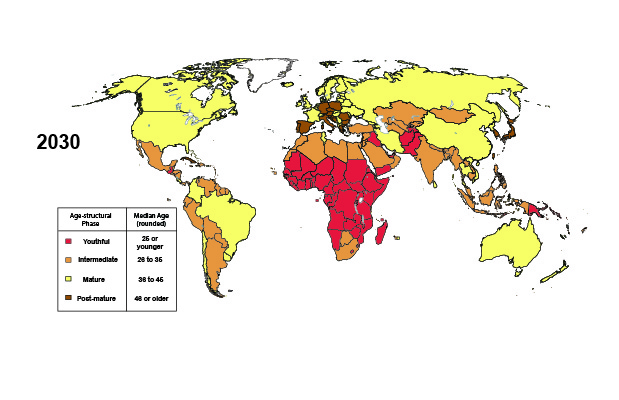 There are growing indications that states might develop more quickly by sustaining their intermediate phase—which, for very-low-fertility states, has been rather fleeting (for example, China recently departed the intermediate phase after entering 25 years ago). In fact, states that have achieved near-universal secondary education and sustained a lengthy period of economic prosperity and liberal-democratic stability, including the US, have done so during their population’s presence within the so-called age-structural sweet spot: starting in the their intermediate phase and finishing during the first half of the mature phase (the mature phase ranges from 35.5 to 45.4 years).

Richard Cincotta is Demographer-in-residence at the Stimson Center in Washington, DC, and a consultant on political demography for the Woodrow Wilson Center’s Environmental Change and Security Program. From 2006-09, he served as a long-range analyst for the (U.S.) National Intelligence Council.